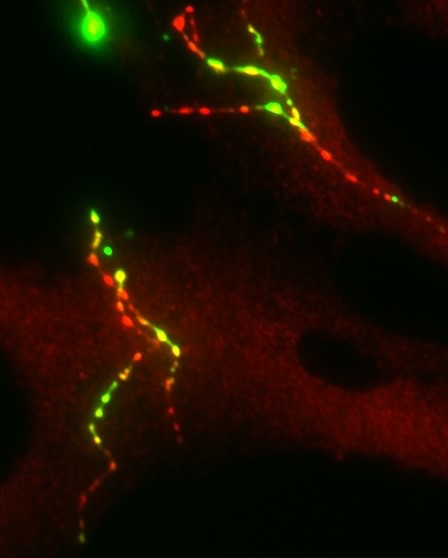 “Inserm scientific advances” selects each year some remarkable discoveries from fundamental, clinical and technological research laboratories. This year, ten studies were selected, including the one by the Sandoz team at iBV.

Genetic mutations, related to disease, are generally deleterious, inducing a loss (or in some cases a gain) of function of the translated protein. But some mutations leading to disease do not follow this rule as they are functionally silent. How then a protein can cause disease without affecting protein function? The Sandoz team addressed this question by studying the example of the most common S38G and R32H mutations of the KNCE1 protein which are associated with cardiac arythmia. Cardiac Voltage-Gated Potassium channels, producing the so-called Iks current ,are made of an alpha pore forming subunit KCNQ1 specifically associated to a specific beta regulatory subunit KCNE1. Because Iks is involved in repolarizing phase of the action potential, Iks dysfuntion leads to long QT syndrome and therefore deleterious mutations affecting either alpha KCNQ or beta KCNE subunit generate an action potential elongation provoking the disease. Nevertheless, the S38G and R32H common mutations of KCNE1 are related to disease without affecting the Iks current, raising the question of How these mutants can induce and transmit cardiac diseases? The team showed in fact that the KCNE1 subunit, in addition to be the beta subunit of potassium channels, is also a beta subunit of the anocytamine Chloride Channel family which is not phylogenetically related to the KCNQ channel family. This result breaks the well-established dogma stating that each subunit is specific for each other, and the idea of a coevolution of these subunits to keep the function of protein complexes during evolution.

Therefore, these original findings question directly ion channels classification and more generally our manner to classify genes and proteins. Finally, this work has an important clinical relevance, in that it explains why KCNE1 mutations may lead to disease without affecting K current, further demonstrating the importance of chloride current in generating cardiac arrhythmia and its potential to serve as a target to prevent and treat cardiac arrhythmias.