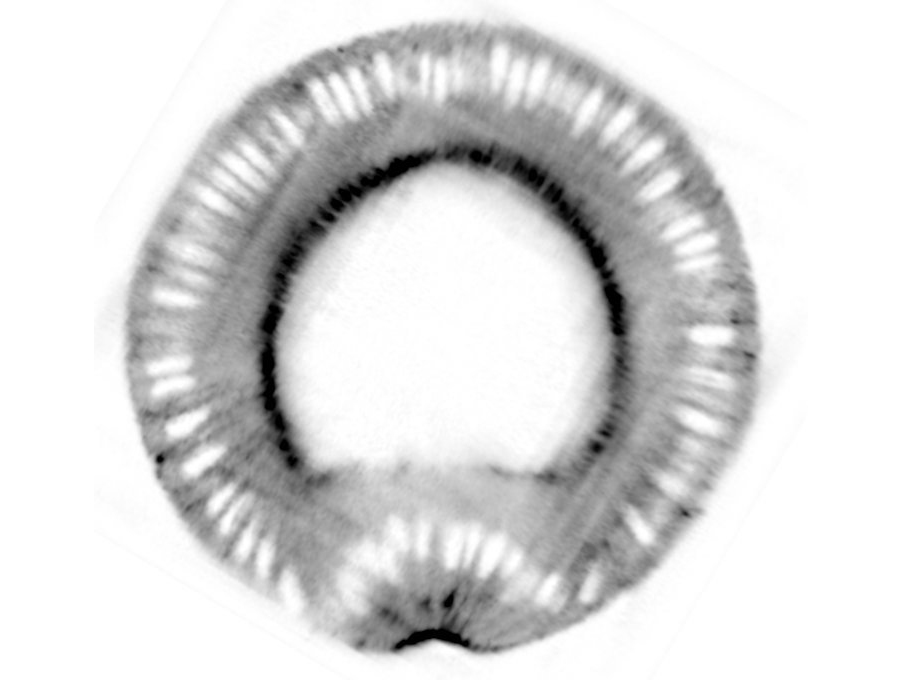 Morphogenesis is the process via which tissue shape is remodeled to give form to life during embryo development. Understanding the fundamental cellular mechanisms driving tissue morphogenesis is thus understanding how multicellular life emerges and is shaped. Much effort has been undertaken to unravel the mechanisms responsible for simple tissue shape changes. Nevertheless, little or nothing is known of the cell mechanisms responsible for composite morphogenetic processes resulting from multiple and simultaneous shape changes of a tissue. This study, developed in the Rauzi lab, identifies for the first time a mechanism based on two-tier cell junctions driving composite morphogenesis.

During embryo development, tissues are remodeled to give shape to life. 7 is the number of fundamental tissue shape changes responsible to reshape an embryo. A tissue can (i) grow, (ii) shrink, (iii) twist, (iv) thicken, (v) thin, (vi) fold and (vii) extend. In the last decades, scientists have strived to identify the fundamental cell mechanisms responsible for these epithelial shape transformations. This knowledge is key to identify the cause of fetal illnesses (e.g., spina bifida) to eventually develop effective therapies. Specialized mechanisms have been identified driving specific tissue shape change. For instance, epithelial cells reduce their apical surface (a process known as ‘apical constriction’) in a coordinated fashion to initiate tissue folding. During tissue extension, cell remodel their contact junction exchanging neighbors in a stereotyped fashion (process known as ‘cell intercalation’). Nevertheless, during embryo development, a tissue can undergo multiple changes in shape not only sequentially but also simultaneously. For instance, during gastrulation the embryo of a vertebrate elongates along the anterior-posterior axis to separate the future head from the anus while it folds forming the neural tube. This raises an important question: how can a tissue undergo multiple simultaneous shape transformations if each transformation is per se driven by a functionally specific cellular mechanism? In addition, which signaling pathways are controlling composite morphogenetic processes? With this study, Alphy John and Matteo Rauzi uncover a new mechanism and shine new light on the signaling pathway responsible for simultaneous tissue folding and extension.

The Rauzi team uses the Drosophila embryo (Figure a): an extremely powerful model system providing cutting edge genetic tools and free of restrictions to comply with ethical norms to study the fundamental cell mechanisms driving morphogenesis in a physiological relevant context. Adherens junction are known to function as anchoring points in between cells on which forces, generated by coupled actomyosin networks, are exerted. In this study, Alphy and Matteo discover that epithelial cells can form distinct sets of adherens junction at two different apical-basal positions resulting in a two-tier junctional system. While the first junctional tier mediates apical constriction initiating tissue folding, the second tier mediates polarized cell intercalation initiating tissue extension (Figure b and c). Alphy and Matteo show that the formation of two-tier junctions is under the control of the synergetic action of the anterior-posterior (AP) and dorsal-ventral (DV) gene patterning.

While AP and DV gene patterning have been studied and interpreted as sources of orthogonal signals eventually controlling separated features of a system, this study shows for the first time how these signaling sources can cross-talk and act synergistically to control morphogenesis during embryo development. Future work is now necessary to further explore the interplay between these fundamental signaling sources. 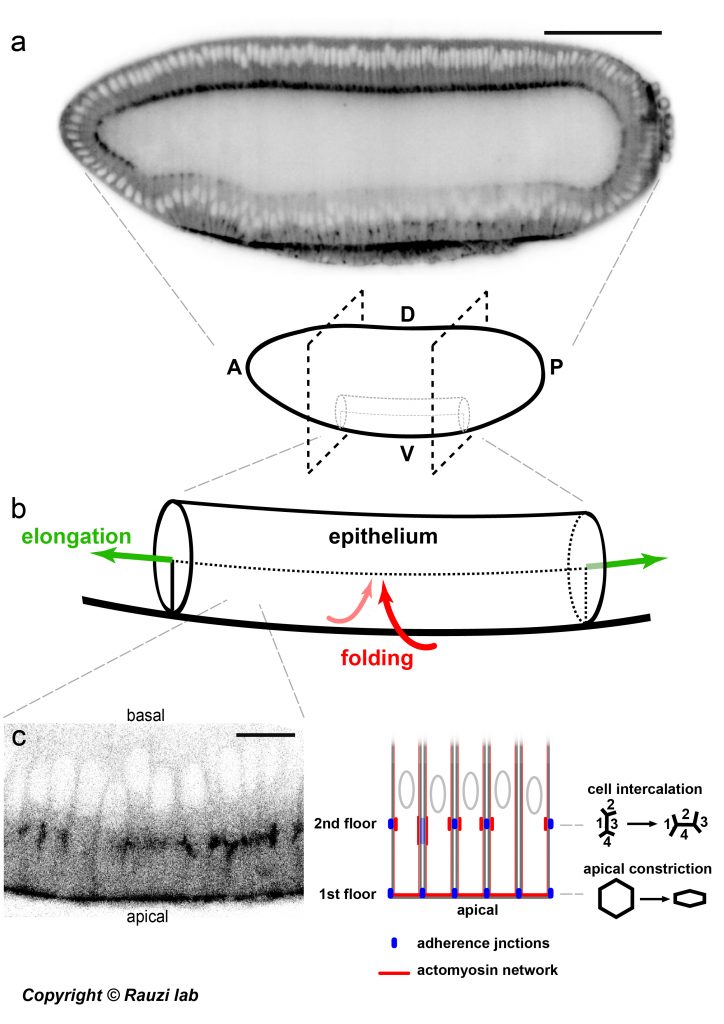 Figure: from the embryo to cell scale and back to unravel a two-tier junctional mechanism driving simultaneous tissue folding and extension.