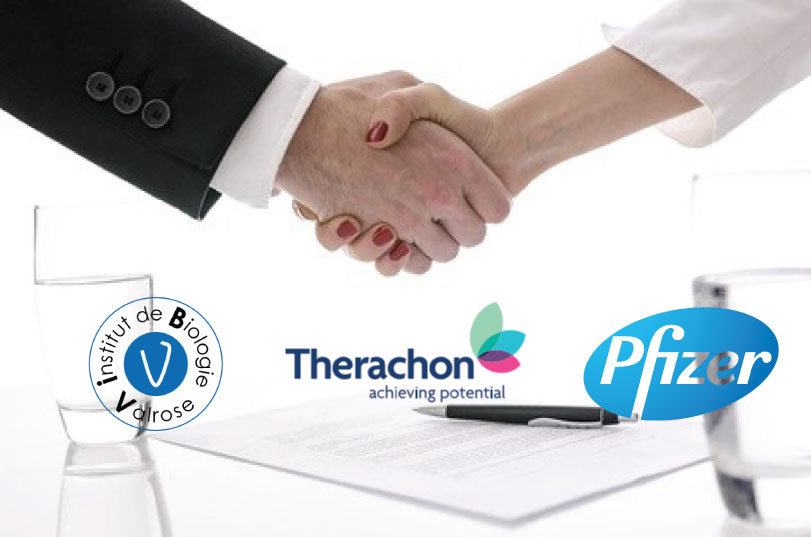 The ‘institut de Biologie Valrose’ (iBV) congratulates Elvire Gouze, Group Leader at iBV (http://ibv.unice.fr/research-team/gouze/), for her visionary and successful project to cure skeletal dysplasia. Following her seminal work on FGFR3, E. Gouze founded the TherAchon biotech in 2013 in which she acted as scientific director. Thanks to the scientific work led by E. Gouze at iBV and leadership of Luca Santarelli, CEO of TherAchon, the world’s premier pharmaceutical company Pfizer just announced that they acquired TherAchon for 340M$ (see announcement here: https://therachon.com/pfizer-acquires-clinical-stage-biotech-therachon/).

Our vision is to bring together basic and clinical sciences in the same institute to better understand normal and pathological physiology. To this goal, iBV, with the support of Université Côte d’Azur (UCA), CNRS and Inserm, has developed the iBV BioIncubator where TherAchon is hosted. Our aim is to help develop more biotechs in relation with iBV team projects. Of no surprise, Elvire has already new biotech projects in the work to cure more rare diseases.

The story of TherAchon from her founder.

We asked Elvire to tell us about her motivations for doing science and how did TherAchon came to reality?

E. Gouze: “I have always been extremely interested in applied and translational research, studies that have the potential to directly impact human disease. While in the US, my research focused on musculoskeletal disorders, and how these may be treated by gene- and stem cell-based therapies. I approached these investigations from a standpoint of intervention to determine the extent to which we could use gene transfer to correct inflammatory or degenerative processes in the joint. Having gained significant experience with gene transfer and stem cell technologies in the development of treatments for these acquired conditions, I started to evaluate their application to the treatment of genetic conditions affecting the skeleton, initially focusing on achondroplasia, the most common form of short limb dwarfism. This change of research area was deliberate and driven by a personal interest in inherited pediatric applications and by the challenge of applying my knowledge and expertise on biotherapies, cartilage and bone to these conditions. Our research program focused on developing a recombinant protein approach for the treatment of achondroplasia. After receiving funding from the European union (FP7 people), I was recruited in 2009 at Inserm as a CR1 to specifically develop this new research program. In vivo proof-of-concept was demonstrated in 2013 and published in Science Translational Medicine.

At the time of publication, a press statement was issued by the Science group and a press conference was organized by Inserm. Consequently, our work got a great deal of media attention, impacting the wide public, patient associations, but also several industrials, which led to the creation of TherAchon, as in Therapeutics for Achondroplasia (www.therachon.com). Starting a company was mandatory to bring enough funding to reach the clinical proof-of-concept. I have chosen not to be CEO of TherAchon as I wanted to continue my fundamental research, but I provided my expertise through a collaborative contract for which I was scientific director.

TherAchon closed a $35 million Series A round in 2015 and a $60 million Series B in 2018. These financing rounds were led by the biggest venture capital, both US and European funds.

Orphan Drug Designations were granted both by the EMA and the FDA end of 2017, and phase I clinical trial started early 2018. While we are at an early clinical stage and after only 5 years, Pfizer has just acquired TherAchon.

Since 2016, I have also had the chance to be a team leader at iBV which provides a vivid scientific environment for both basic and clinical science. My team focuses on the development of biotherapies for skeletal dysplasia. Therachon was hosted within the iBV allowing for the project to continue to grow and reach this stage of development.

This has been a fantastic adventure and I thank Luca Santarelli, CEO of Therachon, for his leadership and sharing with me his knowledge. I hope this will only be the first example of the quality and ambitious research that can be developed at iBV and UCA.”