Skip to content
Home
/
News
/
Lockdown is not idleness! 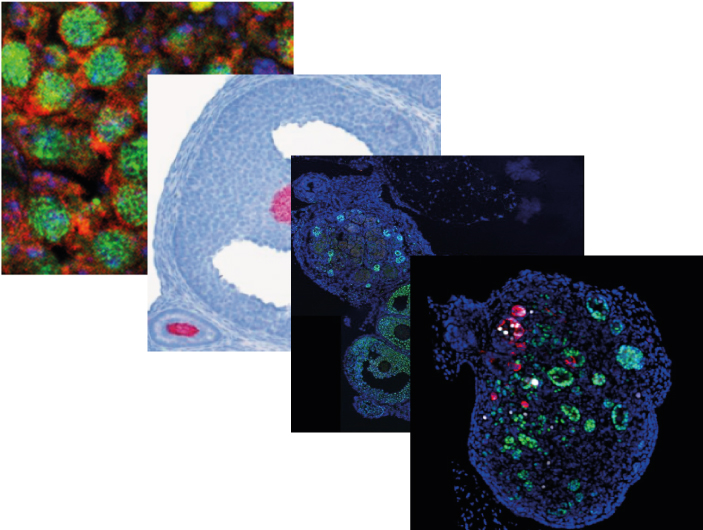 The team of Marie-Christine Chaboissier at iBV has been involved for several years in the study of mechanisms that govern sex determination as well as normal and pathological development of testes and ovaries.

This team has just published four articles in international journals. They are highlighted in the national edition of INSB/CNRS and some will be used for a more general press release.

An old dogma in reproduction challenged

In this study, the team questions a dogma in reproductive biology.

Meiosis is essential to sexual reproduction that results in novel assortments of chromosomes for the transmission of unique sets of genes to the offspring. For almost 15 years, it has been commonly admitted that retinoic acid, a molecule synthesized from vitamin A, induces the meiosis in mammalian germ cells, but strong in vivo evidence was lacking. To clarify the role of this molecule, the researchers have genetically inhibited retinoic acid synthesis in mouse fetal ovaries and showed that meiosis normally occurred despite the absence of retinoic acid. These findings, published in Science Advances, definitively close a longstanding controversy and open new avenues in the search for the signals controlling meiosis initiation in germ cells.

R-spondin2 is essential for ovarian function and fertility 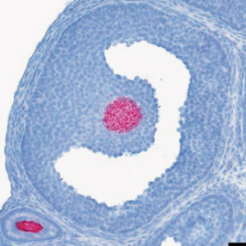 The team has also shown the major role of the protein R-spondin2 in intercellular communication between the oocyte and the neighboring somatic cells required for the follicular growth and in turn the fertility of the females.

Proteins of the R-spondin family are secreted proteins regulating the activation of the WNT/β-catenin signaling pathway, a central pathway in ovarian development.

The recent finding of Rspo2 expression in the oocyte at birth suggests an important role of RSPO2 in follicular growth and in premature ovarian failure. Follicular growth involves both oocyte growth and proliferation of the neighboring nourishing cells, the granulosa cells. When a threshold amount of granulosa cells is reached, the follicle “De Graaf” is ready for ovulation and for the subsequent release of the oocyte. In this paper published in Cell Death and Differentiation, the team demonstrates that the activation of WNT signaling mediated by RSPO2 is essential for the proliferation of the granulosa cells.  Indeed, the absence of Rspo2 expression or the inactivation of WNT signaling in these cells blocks the follicular growth leading to sterility. 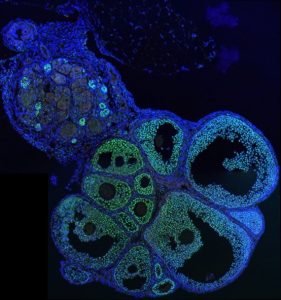 The work published in eLIFE, focuses more specifically on the sexual differentiation of the gonads.
In mammals, testicular differentiation is initiated by the expression of the transcription factors SRY and SOX9 in XY embryos and R-spondin1 (RSPO1) stimulates the XX gonads to develop into ovaries. Accordingly, loss of Sox9 or Rspo1 in XY and XX embryos respectively, leads to sex reversal.  The absence of RSPO1/Rspo1 in XX gonads leads to testicular differentiation and female-to-male sex reversal in a manner that unexpectedly, does not require Sry or Sox9. This suggests that another gene may compensate for the loss of Sox9. To address this question, the researchers studied mice lacking Rspo1, Sox8 and Sox9 and showed that an alternate testis-differentiating factor exists, and this factor is Sox8.

In human species, the molecular mechanisms underlying sexual development disorders remain largely unknown. Identification of new factors such as SOX8, could contribute both to the diagnosis and to anticipate the best treatment of these pathologies. 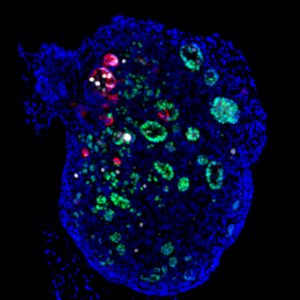 Finally, in the last study, the researchers identified distinct stages specifically controlled by the male and female pathways during pathological gonad development. In mammals, defects in the genetic cascades that direct the formation of testes and ovaries lead to anomalies that can result in sex reversal. How does sexual development proceed when genes controlling the male and female pathways are mutated simultaneously? Genetic analysis shows that double mutant mouse embryos for Sox9 and Wnt4, two genes involved in testicular and ovarian development respectively, undergo two successive sexual inversions. This work has just been published in the journal Cells.

Congratulations to the team!

All these data will contribute to advance our knowledge on sex determination and fertility, but it is clear that many questions remain to be answered in the field. Rendez-vous in the coming years for more.