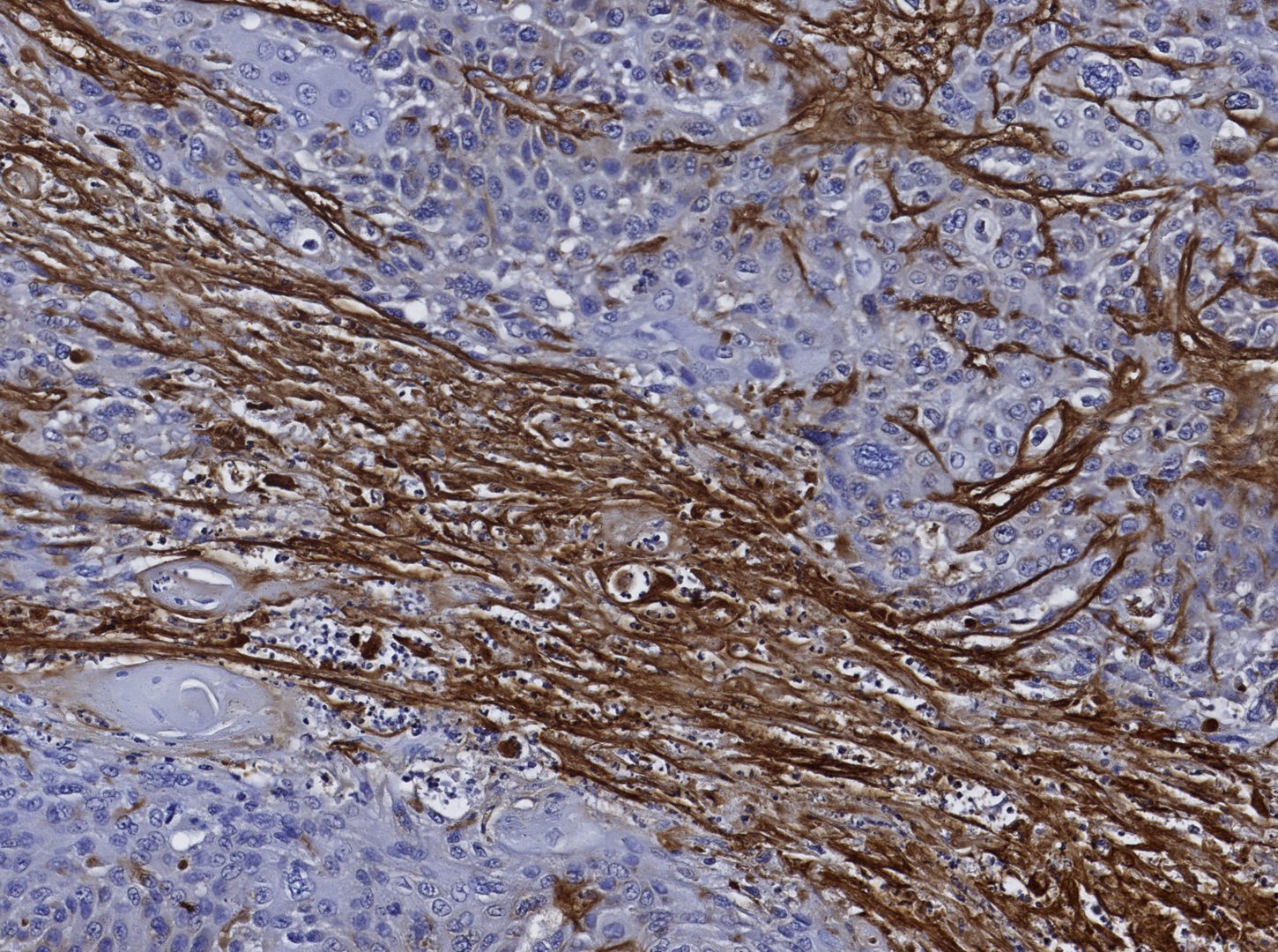 The malignant progression of epithelial tumors is strongly dependent on the interactions between cancer cells and their environment. Thanks to a fruitful collaboration between the teams of Gertaud Orend (Inserm U1109, Strasbourg), Ellen Van Obberghen-Schilling (iBV, Nice), Fabienne Anjuère (IPMC, Sophia Antipolis) and clinical partners at the Centre Antoine Lacassagne revealed that Tenascin C, an extracellular matrix protein, promotes the progression of head and neck cancer. Through its modulation of the tumor cytokine environment, Tenascin-C enforces stromal immobilization of myeloid cells and prevents them from playing their protective role as sentinels of the immune system. This work was published in Cancer Immunology Research.

Head and neck squamous cell carcinomas (HNSCC) are heterogeneous malignancies originating from the mucosal surface of the upper aerodigestive tract of which the majority are caused by chronic exposure to carcinogens including tobacco and alcohol. The 5-year worldwide survival rate is less than 50% for these patients due to disease recurrence and spread. Immunotherapies that target immune checkpoint inhibitors have shown great promise with long-lasting effects, yet only a fraction of patients respond (roughly 20%). Hence, much efforts are needed to understand the mechanisms underlying treatment resistance and to improve clinical efficacy of immunotherapy.

During HNSCC progression, the physiologic microenvironment is converted to an “immune-suppressive” state. This conversion is accompanied by important changes in the composition, topology and abundance of the extracellular matrix (ECM). Tenascin C (TNC) is an ECM protein upregulated in the stroma of HNSCC. Although expression of TNC is mostly absent in normal adult tissues, it becomes induced during wound-healing, inflammation and cancer. TNC is also present in reticular fibers of lymphoid tissues where it regulates leukocyte maturation. In cancer tissues, TNC is organized in so-called matrix tracks that share certain features with reticular fibers, suggesting that TNC may play a role in regulating immune cell functions. Indeed, the researchers reported that >90% of tumor-infiltrating immune cells reside in the TNC-rich stromal of human tongue tumors. To better understand how immune cells interact with the neoplastic stroma in HNSCC, and to determine the potential role of TNC in these interactions, they used a carcinogen(4NQO)-induced immunocompetent mouse model of oral squamous cell carcinoma (OSCC). Comparison of tumors in wild-type (WT) and TNC knockout (TNCKO) mice allowed them to demonstrate a role for TNC in OSCC progression and suggest a mechanism by which the TNC-rich stroma shapes an immune-suppressive cytokine microenvironment and regulates the positioning of infiltrating immune cells. To read more, see Spenlé and Loustau et al. Their results provide highly pertinent information for identifying new stromal-directed therapeutic targets and strategies to predict and improve treatment response.