In humans, aging has been linked to various defects that lead to loss of irreplaceable cells, including neurons and glial support cells in the brain, resulting in impaired neural synaptic networks and cognitive functions. The molecular mechanisms involved in maintaining the integrity of the adult brain are still poorly understood. The use of Drosophila as a model biological system has enabled researchers from the Valrose Institute of Biology to demonstrate that the Hedgehog molecule, known for its role as a “tissue organizer” during embryonic development, is utilized during adult life to protect glial cells and subsequent neuronal integrity, which increases the lifespan of the animal. This work is published in the journal Cell Reports and features on the cover of the journal.

The drastic increase in life expectancy worldwide has increased the proportion of the elderly population and has led to a dramatic upsurge in age-related diseases. Aging is the main risk factor for the increased prevalence of many neurodegenerative diseases, including Alzheimer’s disease, which is expected to affect a total population of 50 million people worldwide. Therefore, any advances in the molecular mechanisms involved in aging will enable the development of new therapies to alleviate age-related diseases. At the cellular level, aging has been associated with various dysfunctions that lead to the loss of irreplaceable cells, including neurons and glial support cells in the brain, resulting in impaired neuronal synaptic networks and cognitive function. There are multiple mechanisms involved in cell aging, however, our knowledge of the main circulating molecules involved in maintaining the integrity of the adult brain remains limited.

The team of Pascal Thérond (Institut de Biologie Valrose iBV, Université Côte d’Azur, CNRS, Inserm in Nice) has been studying for many years the mechanism of action of the Hedgehog molecule (Hh), a molecule highly conserved in vertebrates, and has shown its role as a tissue organizer during embryonic development. Andrew Rallis, a researcher in the team, initiated this study by wondering if this molecule could also have a role during the adult life. For this, he used Drosophila as a model system, which is a valuable paradigm for studies on the extension of lifespan, due to its relatively short life, its ease of genetic manipulation and its molecular conservation with mammals.

The overall goal of the project was to gain an in-depth understanding of how Hh is able to promote healthy longevity and maintain homeostasis in the adult brain during aging. For this the animal was genetically manipulated as to suppress Hh activity (controlled Hh mutant) from only the first days of adulthood in order to prevent any developmental defects. In this context, they were able to show a sharp decrease in the longevity of the animal, associated with a loss of the integrity of dopaminergic neurons and of locomotor activity. More impressively, an elevation in the level of the Hh protein only during adulthood made it possible to increase the mobility and the lifespan of the animal. The authors have shown that Hh activity in the adult brain stimulates glial cells, and that their activation in an animal mutant for Hh allows the restoration of dopaminergic neurons, mobility and longevity of the mutant [2]. The authors sought to understand at the molecular level the mechanism of action of Hh in the brain, and more particularly at the level of glial cells, which are strongly involved in neuronal integrity.

In collaboration with researchers from the University of Regensburg, they have succeeded in showing that in response to Hh, glial cells express molecules called chaperones. These proteins are known to act in cooperation to prevent both the misfolding of newly synthesized proteins and the aggregation of proteins during cellular stress. Remarkably, the expression of two of these chaperone proteins (Hsp40 and Hsp68) in the glia of Hh mutant flies, exerts a powerful neuroprotective effect, with salvation of neuronal defects, locomotion and longevity of the animal. To confirm these results, the team used a molecular model recapitulating Alzheimer’s disease toxicity in Drosophila, a model in which protein aggregates are observed in brain cells [1]. These aggregates are also responsible for limited mobility and longevity in the fly. The authors were able to show that activation of glial cells by Hh partially corrects locomotion and longevity in this model of Alzheimer’s disease. Overall, these studies suggest that glial-neuronal communication in the adult brain is controlled by Hh which guarantees neuro-protection supported by protective factors of the glia.

This new function of Hh as an actor in the regulation of lifespan is certainly conserved in mammals. Indeed, all the molecular actors described in this study are conserved; in particular the vertebrate counterpart of Drosophila Hh, Sonic Hedgehog (Shh), is also present in the brain of mice and murine glial cells respond to this signal. Since Shh has been shown previously to have a protective role against various neurotoxins in vitro, this new study suggests that activation of the glia by Hh may improve neurodegenerative diseases caused by the aggregation of aberrant proteins which accumulate with age, and prolong longevity and physical fitness. 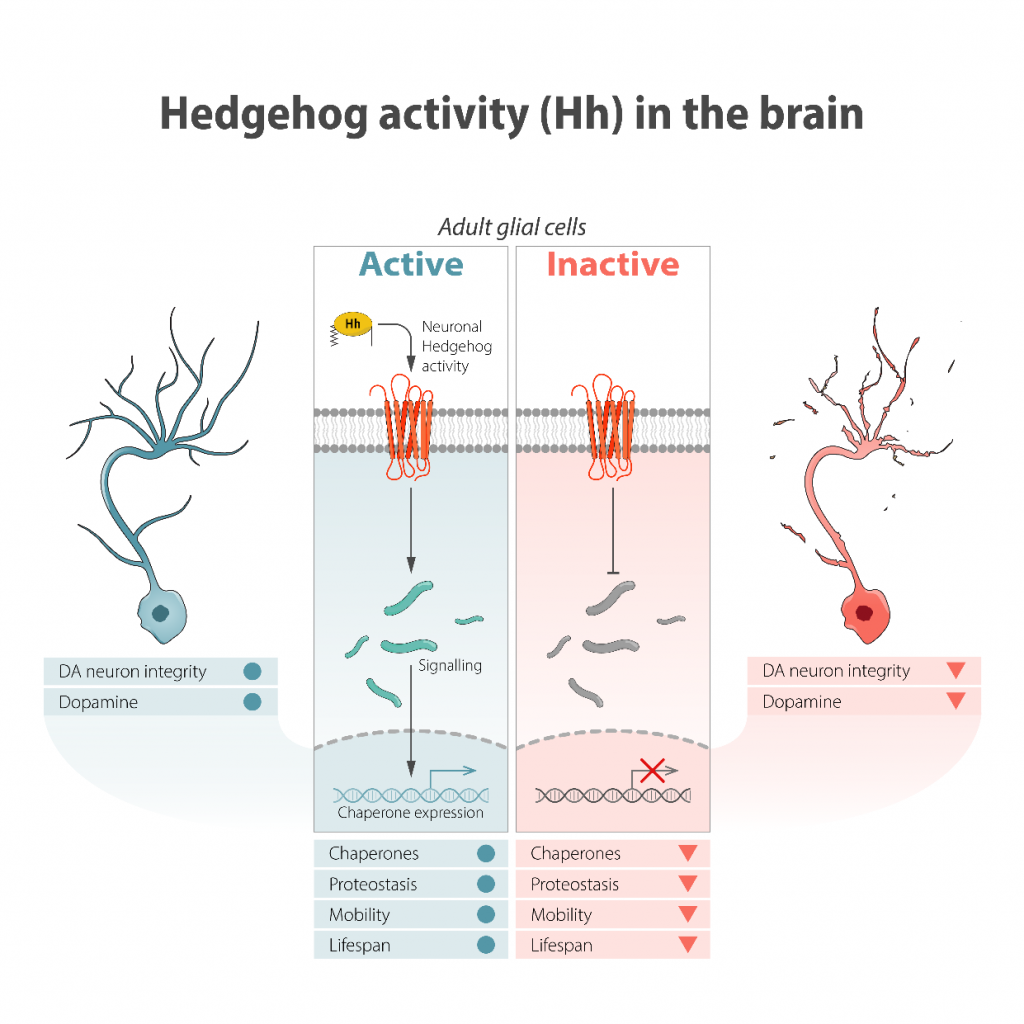 Figure 2: Hedgehog activity in Drosophila brain activates glial cells, regulating the expression of chaperone molecules that control the proteostasis of these cells. Indirectly, this causes a neuroprotective effect on various neurons, including dopaminergic neurons. In the absence of Hh, the neuroprotective effect of glial cells is affected, leading to a loss of neuronal integrity, loss of mobility and longevity.