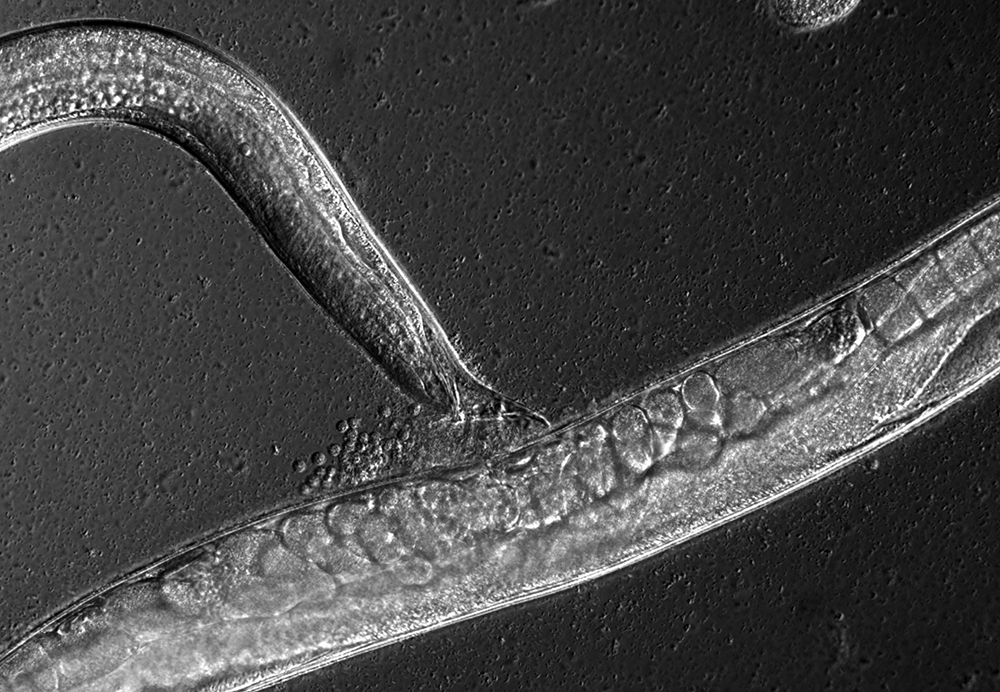 Spermatozoa come in many incredible shapes and sizes across species, with sperm competition being one of the main factors driving this exceptional diversity. Although Caenorhabditis elegans nematodes reproduce mainly through self-fertilization, they are also able to mate with the occasional male. In a study published in Genetics this October, the team of Christian Braendle at the iBV has documented natural genetic variation in C. elegans sperm size across a hundred wild isolates. This analysis uncovered that the laboratory evolution of extreme sperm size reduction can be explained by a 60 bp deletion in the gene nurf-1, a member of an evolutionary conserved chromatin remodeling complex.

C. elegans spermatozoa do not exhibit sophisticated ornaments or long flagella but adopt instead an amoeboid morphology to efficiently crawl into hermaphrodite uterus and spermathecae. Previous studies performed by other laboratories on a few wild isolates had suggested that sperm size was a major factor of male sperm competitive ability, but nothing was as of yet known about the molecular mechanisms and the genetic basis of sperm size regulation.

Using a large panel of a hundred C. elegans isolates originating from diverse habitats worldwide, the researchers documented significant natural variation in the size of both male and hermaphrodite sperm, the latter being always smaller than their male counterpart. More significantly, the study provides first insights into the molecular genetic basis of C. elegans sperm size regulation by taking advantage of a lab strain grown in axenic liquid medium for more than 40 years, during which this strain evolved extremely small sperm. Using quantitative complementation tests, the study shows that sperm size reduction could be explained by a 60 bp deletion in the 3’ region of the nurf-1 gene, a member of the evolutionary conserved chromatin remodeler complex NURF-1. The team of Patrick McGrath (Georgia Institute of Technology in Atlanta, a collaborator of the Braendle’s group in the present study) had previously shown that the same deletion promotes reproduction by self-fertilization. Together, these findings indicate that evolution at the nurf-1 locus has strongly pleiotropic consequences across sexes.