Skip to content
Home
/
News
/
Evolution of a trade-off between two life history traits in the nematode C. elegans. 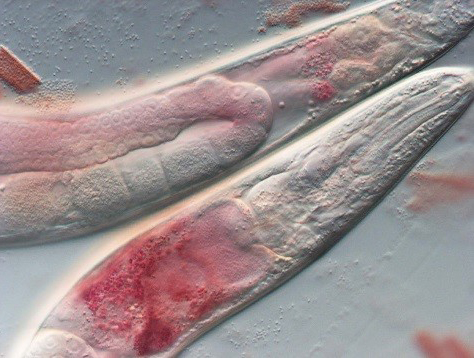 In a recent study published in Current Biology, the team of Christian Braendle describes a wild isolate of C. elegans with an increased propensity to enter an early developmental diapause called dauer, even in mildly stressing environments. Using Quantitative Trait Locus (QTL) analysis and Crispr-based allelic replacement, they identified a 92 bp deletion in the promoter region of the gene eak-3 as the genetic cause for increased dauer formation in this strain. The resulting reduction in eak-3 expression causes in turn a decrease in dafachronic acid (DA), a pleiotropic steroid hormone that normally inhibits entry into dauer. Interestingly, DA reduction is also responsible for the slower development of this isolate, in comparison to other strains with an undeleted promoter of eak-3, indicating the existence of a trade-off mechanism between developmental time and plasticity. Competition experiments using genetically engineered strains confirmed this hypothesis: while worms harboring the eak-3 deletion are rapidly overgrown in optimal growth conditions, they have, on the contrary, a strong selective advantage in environments that facilitate dauer formation.

This study is one of the first describing the molecular basis underlying adaptive developmental plasticity and shows how a single genetic event can underlie a seemingly complex life history trade-off. 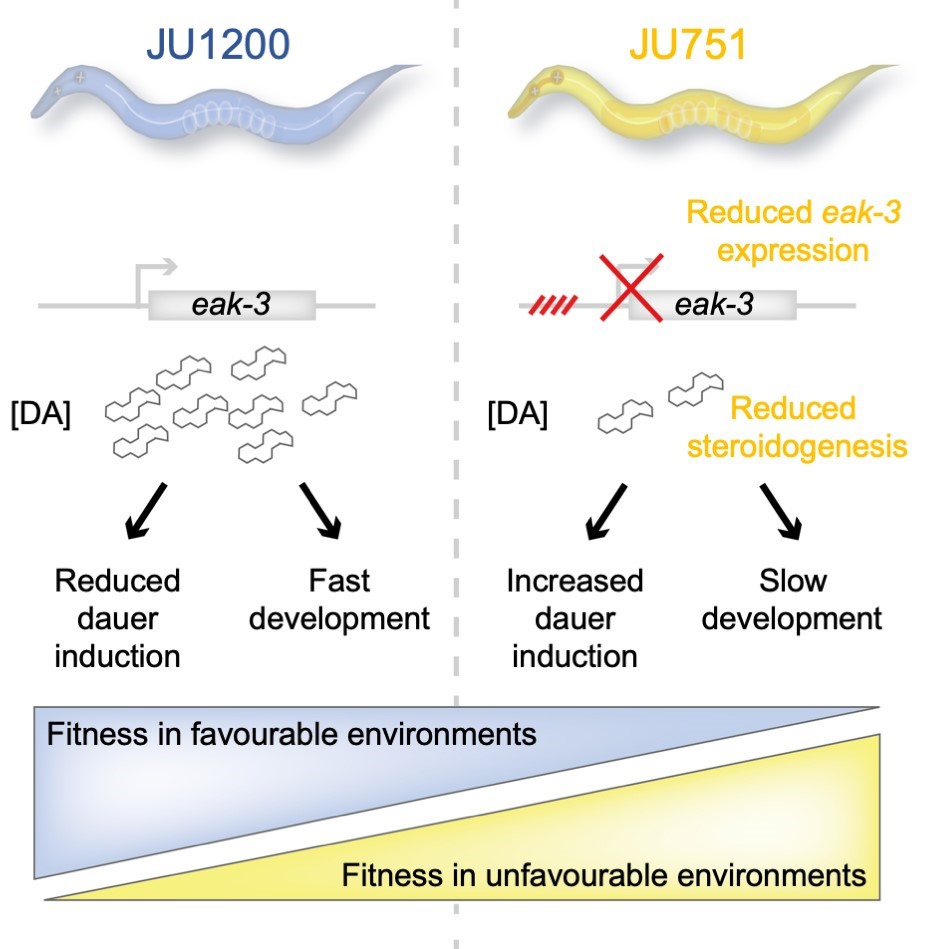 Figure:
Evolutionary trade-off between developmental plasticity and growth. A naturally occurring variant affects the expression of eak-3, a gene involved in the Dafachronic Acid steroid biosynthesis pathway. By reducing the biosynthesis of this hormone, this variant increases the phenotypic plasticity of the worms (= promotes the induction of the dauer stage), and slow down development. Because of this evolutionary trade-off, the variant has opposite adaptive consequences depending on the environment:
• In unfavorable conditions it presents a clear selective advantage
• In favorable conditions, the variant is on the contrary very strongly counter-selected.