Skip to content
Home
/
Alumni
/
Nausicaa Poullet, from the iBV to INRA Guadeloupe 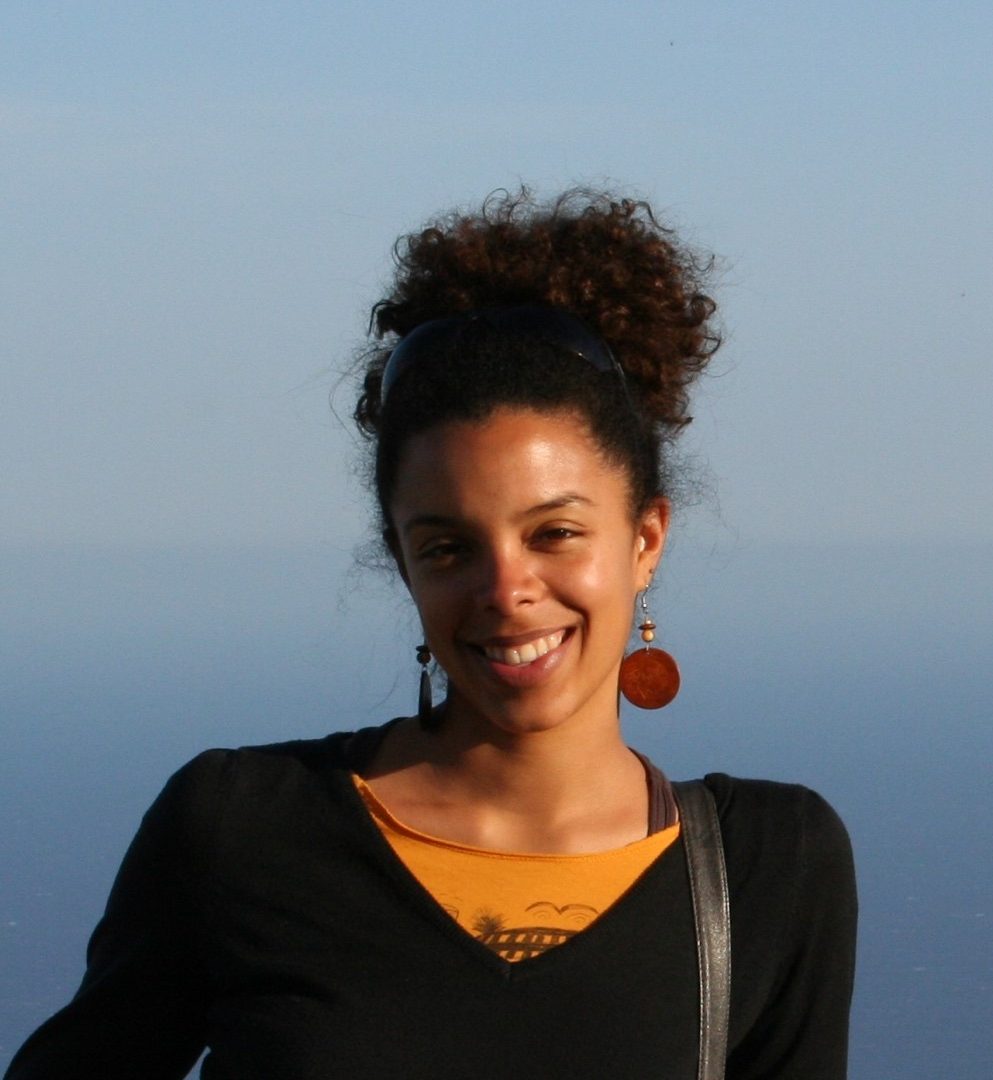 Nausicaa was the first student to graduate in the iBV  lab of Christian Braendle, in 2013. Since then, she held two post-doc positions in Montpellier and in Guadeloupe, after which she secured a permanent position at INRA (National Institute for Agronomical Research), travelled the world even more than before and found the time to make a beautiful little girl!

« I have been working in Madrid for the past few months, to get some deep training in quantitative genetics, it’s very nice but we are no longer used to large cities. So the three of us leave for the Navarra countryside for a few days! »

These sentences embrace what Nausicaa Poullet values most in her life: doing exciting research, travelling as a family and a love for the great outdoors.

Originally trained as a biotech engineer, Nausicaa first discovered the joy of working with nematodes and zebrafish at New-England Biolabs in Massachusetts and Evotec in Oxford. “Formulating hypotheses, designing and performing experiments, slowly drawing conclusions… I had found out what I wanted to do! But I also realized that I needed a PhD if I wanted to carry out my own research.”

So in 2009 she moved to the Braendle lab at the iBV where she worked on the evolution of the germline response to environmental stressors in three hermaphroditic nematode species, all members of the Caenorhabditis genus. Obviously, when it came to thermotolerance, tropical isolates liked it hot and badly endured the relative coolness of an incubator at 15°C. Still, Nausicaa found out that each species had its specific thermal limit and that the way the germline coped with temperature stress was very different from one species to the next.

Another question Nausicaa was passionate about was how mating systems evolve: hermaphrodites carry both sexes in their body and are auto-sufficient for offspring production, but one may wonder if and how resource allocation between sexes evolves. A collaboration with the lab of Henrique Teotonio – in Lisbon at the time – gave her the opportunity to dive more deeply into these questions: she measured diverse germline, somatic and life history traits in C. elegans population in conditions imposing a 4-day life cycle for 100 generations. “When we compared ancestral and evolved populations, we discovered fascinating mechanisms of heterochrony not only in gametogenesis but also in the relative progression of germline versus soma, indicative of adaptive shifts in hermaphrodite sex allocation”, she explains. Simply put, these worms found a way to evolve increased sperm production, and, as a happy consequence, more offspring, without being delayed in their reproduction.

“This project was very demanding, with lots of exciting moments but also a few down times. That’s always like that at some point during a PhD”, she says. “But it remains such a special time of my life! I have met many people who are still dear friends today. And I also learned that research and science not only occur in the lab but also in the coffee room, where we had many light bulb moments and where many issues were solved!”

From North to South to … the middle almost!

Nausicaa was a very dedicated and organized student, but in the mean time she has always been very serious about living a good, fulfilling life. So right after her graduation, she took off for a 6-month sabbatical with her boyfriend, direction New-Zealand, where they shared their time between farming and hiking iconic mountains. “Landscapes were an amazement and the best opportunity for direct experience of nature”, she says. “This trip was one of the best decisions of my life!” And full of the most improbable experiences, like learning how to give deworming medication to sheep! “It requires quite a lot of running and wrestling and most importantly a very long shower afterwards!”

But the cosmopolitan flavor in Nausicaa’s life has always been braided together with strong regional roots. After a first postdoc in Montpellier – post New-Zealand – where she worked on the aortic origin of hematopoietic stem cells in zebrafish, Nausicaa and her boyfriend realized they had a deep shared wish: going back to their homeland Guadeloupe. Many would have called this a risky choice, but it turned out to be a very wise career move. “When I found the ad for my current position, I could not believe it” says Nausicaa. “Studying interactions between genes and environment, just like I did during my PhD, but this time to work on pigs in Guadeloupe! I mean, what were the odds?” Shortly after, she was hired as a permanent researcher by the National Institute for Agronomical Research (INRA) with a project on heat tolerance in growing pigs.

Creole pigs: from eradication in the 80’s to appreciation in a changing world

Just like in the old days in the Braendle lab at the iBV, natural variation is a major part of Nausicaa’s current project. Using both wet lab and computational approaches, she is comparing the phenotypic traits and genetics of several breeds of the species, including local Creole pigs, the descendants of Spanish livestock shipped to the Caribbean many centuries ago. Creole pigs are smaller and fatter than our usual ham source but much better adapted to the tropics. With time, they became an essential asset of the rural economy in many Caribbean islands, as tragically confirmed in the early 1980s when swine fever struck Haiti. The virus itself had already started to decimate the pig population, when, for fear of an outbreak in their own country, the government of the United States demanded the slaughter of the surviving animals. This episode, known as the Creole pig disaster, quickly showed that the pink American breeds sent in replacement were unaccustomed to the local climate and food, failing to meet the needs of Haitian peasants and disorganizing rural agroeconomy.

Although Creole pig breeds may genetically differ from one island to the next, studying their global tolerance to environmental stressors – in comparison to breeds from more northern origin – and determining the genetic basis for these natural variations are thus of prime importance to reconcile the pressure of growing human populations in tropical regions with the challenge imposed by resource scarcity and climate change. “I am discovering so much about how animals are bred and raised for the market” says Nausicaa. “Before I started, I had no idea of the amount of research involved in this field. And if our focus on the specific characteristics of Guadeloupe makes it very different from mainland France, it is a great model for tropical areas, where 50% of worldwide meat production occurs”.

Sometimes the measurement of various phenotypic traits and the search for Quantitative Trait Loci on a computer screen may remind her of her PhD research interests. But pigs and nematodes are very different kinds of menagerie. “Working with pigs is a bit of a sport indeed! Fortunately, technicians on the INRA farm are always here to help with manipulating and sampling!”

“It makes me extremely happy to see Nausicaa with a stable and exciting research position back in her native beautiful Guadeloupe”, says Christian Braendle. “I consider myself very lucky to have had Nausicaa in our research group, at a time when I was a young inexperienced PI. Fearless and calm, she navigated through novel challenges and crazy experiments during her PhD, producing an enormous amount of valuable data that built the basis for our ongoing research. Collaborating and sharing the lab environment with Nausicaa was always easy and pleasant, which greatly contributed to both a positive team spirit and productive research output of high quality. We all missed – and still miss – her presence in our team but are of course very glad to see her succeed during her current adventures.”

There is no doubt that, over the years, Nausicaa laid strong foundations for a great professional and personal life, working hard, being curious and making good and authentic choices. Her two-year old girl can only agree, being lucky to visit beautiful châteaux en Espagne with her happy parents!