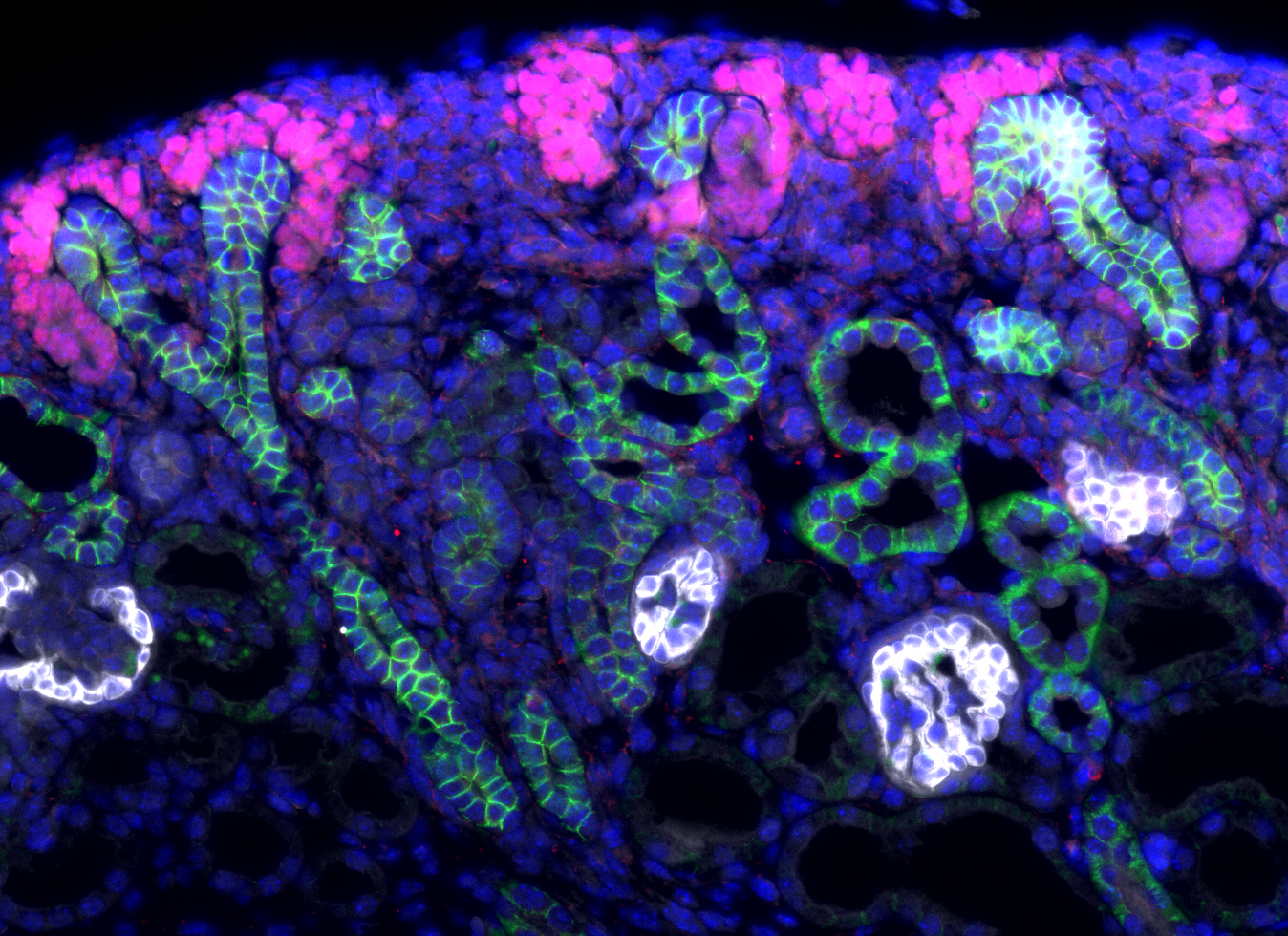 The team of Andréas Schedl at iBV has long been interested in deciphering transcriptional mechanisms that control organs development and more specifically the kidney.

During embryonic development, the population of progenitor stem cells, which is at the origin of nephrons formation, the functional unit of the kidneys, evolves through a complex process of differentiation which involves several cell signaling pathways. Researchers from the Andreas Schedl team have just demonstrated, in mice, the major role of two proteins of the R-spondin family, RSPO1 and RSPO3, activators of the WNT / β-catenin pathway, in the maintenance and differentiation of the nephrogenic niche. This work was published online on April 29 in the journal ELife.

Nephrons are highly specialized structures that represent the central building blocks of our kidneys. They fulfill multiple functions such as blood filtration, excretion of waste products and retention of essential minerals, water and vitamins. The number of nephrons is determined during development and varies highly between individuals. Low nephron numbers represent an important risk factor for chronic kidney disease, a disorder that affects millions of individuals world-wide and causes more deaths than breast or prostate cancer. Understanding the process of nephron formation and identifying the factors involved in this developmental process is therefore of high importance.

Nephrons arise from a specialized progenitor cell population that have stem cell characteristics, self-renew and fuel the formation of new nephrons. As kidney development progresses, the pool of nephron progenitors diminishes to finally disappear in the mature kidney. Upon entering this nephron formation program, progenitors change from a mesenchymal to an epithelial state and acquire different and highly specific functions and shapes. The molecular signals orchestrating self-renewal and nephron induction are only partially understood, but previous research has demonstrated an important role of the WNT/-catenin signaling pathway in both of these processes.

In the present study, Vidal et al. have investigated the role of R-spondins, a family of secreted signaling molecules that are produced in the nephrogenic niche of the mouse kidney. Using genetic models, they demonstrate that R-spondins fulfill two important functions in this developing organ. First, they are required to maintain the nephrogenic niche throughout development by stimulating cell division and inhibiting cell death of nephron progenitors. Second, they are also necessary for progenitor cells to differentiate and form mature nephrons. As a consequence, loss of these factors leads to a rapid decline of progenitor cells and a complete block of nephron formation. Molecular studies demonstrate that R-spondins act by activating the b-catenin pathway. Surprisingly, R-spondins activity seems to be largely independent of its cognate LGR receptors suggesting that they act through alternative molecular adaptors that remain to be discovered.

This study identifies R-spondins as crucial components of the WNT/b-catenin pathway during kidney organogenesis. The important role identified here in mice indicate that mutations in these genes may also predispose to human renal disease. Moreover, these discoveries may also have important implications for regenerative medicine in kidney disease.

Congratulation to the team!

R-spondin signalling is essential for the maintenance and differentiation of mouse nephron progenitors.